Last year on Memorial Day, I was on a plane heading back from Cincinnati, Ohio (click here to read about that trip). Once I got  back home, I spent the rest of my Memorial Day at the All Things Nigeria Expo (click here to read about that event). This Memorial Day, I was heading back home from the Bam African Art Festival in Brooklyn, New York. It is also know as Dance Africa Bazaar. I attended the festival with Anika (owner of Nubian Hueman Boutique in DC), Ebone  (owner of Good Thoughts Tea Company) and photographer Kwesi Abbensetts who lives in Brooklyn, NY. #RoadTrip! At the festival, I saw actress Adepero Oduye (click here to read my blog post about her). I was right next to her but I didn’t say anything. I know she is human but I did not know what to say. I was a little intimidated and did not want to intrude. I also saw video vixen turned reality star (Blood Sweat and Heels) Melyssa Ford. Seeing her in person took me back to my middle school days when I faithfully watched music videos and she was always the star video girl. She was the IT GIRL for hip hop music videos. I didn’t see her at the festival  but I saw her on my way there. She and her girls walked right by me. You couldn’t miss her even if you did not know who she was.

Ebone ( owner of Good Thoughts Tea Company) and I

For years I’ve heard such positive comments about this big festival. I know before actress Lupita Nyongo blew up, she attended and so did  actress MaameYaa Boafo (An African City). I’ve seen past pictures of  both of them in attendance. I am sure many more actresses and actors have attended as well. I can’t say much about the three day festival because I came on day two at 5pm and it ended at 8pm. It always starts on the Saturday before Memorial Day and then ends on Memorial Day Monday. Even though I arrived late, I still enjoyed myself. Anika, who attends every year mentioned that it seemed smaller than usual (thanks to gentrification and new buildings being built in the area) and that the items for sale were not as unique or one of a kind. I did get that sense as well in regards to the sale items being basic . It was like Fest Africa to me but on a BIGGER scale as far as vendors and people go. Fest Africa is a two day African festival that takes place every August in downtown Silver Spring, Maryland (rain or shine). Anywho, Anika told me that in the past there were more designers at the BAM festival selling unique pieces. I I told her that it seemed as though some of the vendors brought old clothes from their basement to sell. Some of the clothing didn’t have lining and some were stuffed inside  Ghana must go bags. The presentation wasn’t there. 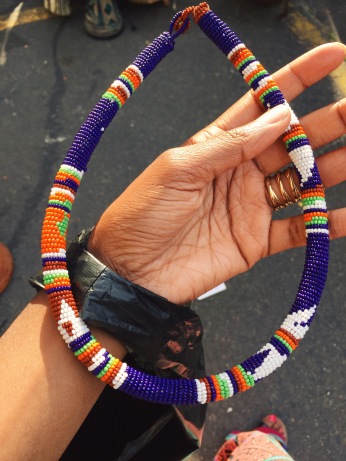 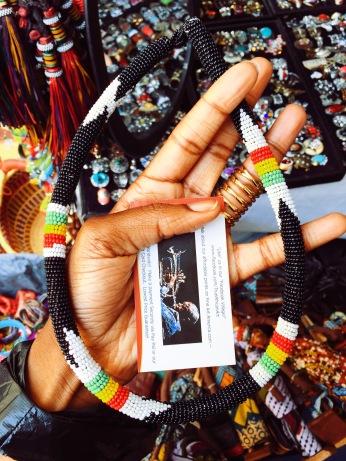 I went for fun and not to shop because I am on a budget. I also would rather spend my money on things in Ghana next month. However, I did want some Zulu necklaces (click here to read my post about them). I know I won’t find them in Ghana. I purchased the necklace on the left above but I wish I had also bought the one on the right. Its so cute! The vendors told me these necklaces were from Mali. I was a bit surprised because I didn’t know these types of necklaces were from Mali. There were some really cute stuff at the festival but some of the items I saw I know I can purchase next month in Ghana, God-willing! 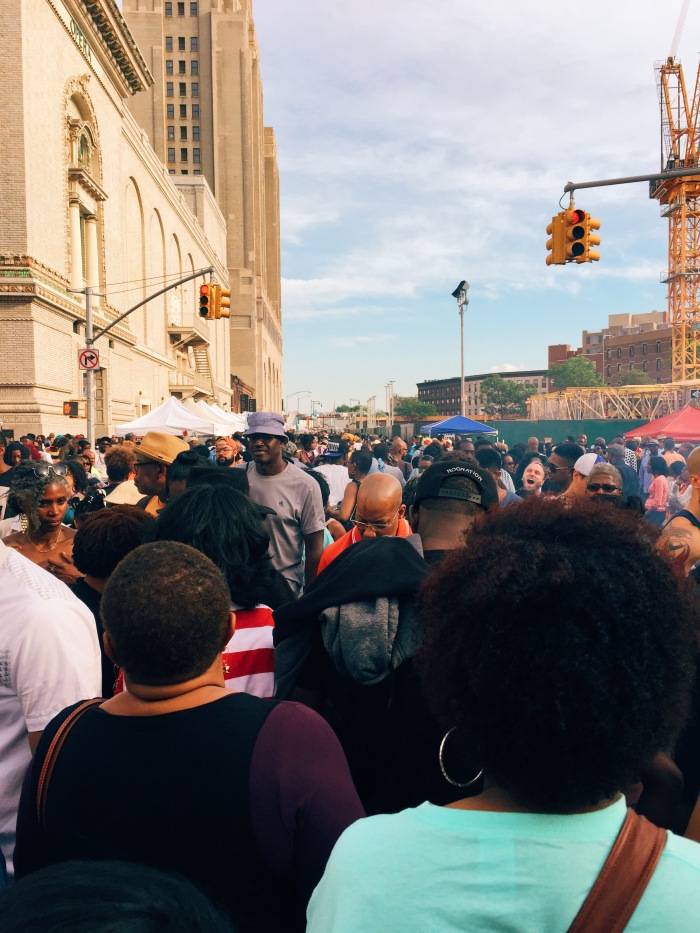 The festival was so crowded and we were in walking traffic pictured above. Lots of people and a bit overwhelming. 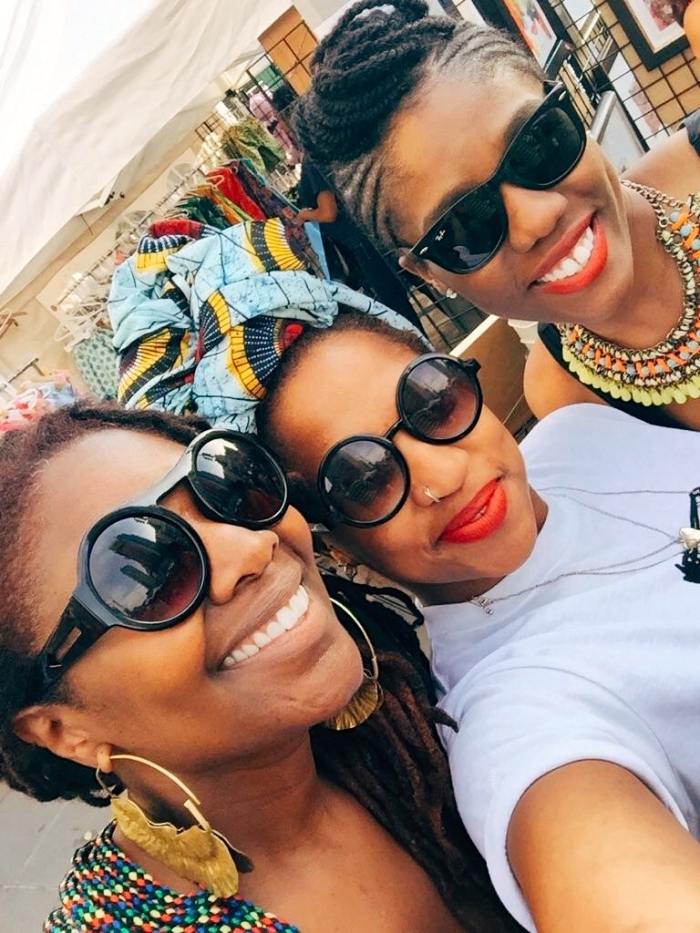 (L to R) Street shot, Gina Paige (Co-Founder and CEO of African Ancestry) and Anika hugging, Ebone , Anika and Ebone, Kim aka KimNubianQueen (I think she’s fly! She gives me Miriam Makeba and Amy Winehouse everytime I see her. I love her style!) , Photographer Kwesi Abbensetts and I 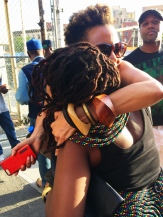 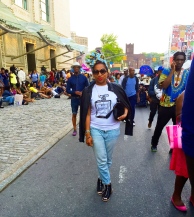 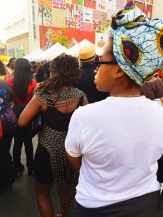 After the festival, we went to eat at Ghenet Brooklyn which is an Ethiopian restaurant in Brooklyn. One of  Anika’s favorite spots. I ordered Asa Tibs aka fried fish served with salad. It was yummy. I also ordered a drink gave me a nice little buzz but then again I am a certified lightweight. I believe the drink name was Cranberry Margarita. I decided to live a little since I always order water. Minus the ridiculous two hour wait, the restaurant was nice. This was my first time eating Ethiopian food even though I didn’t order a traditional dish. Though, I did have some of their bread. I loved my food and drink. #Yum

I love Brooklyn and this was a great start to a BOMB summer (I am claiming it will be bomb!). I would never live there or in NY or in any major city but I love visiting there. The last time I went to BK was on my birthday in November (see here). I am definitely planning to visit again this summer!!! 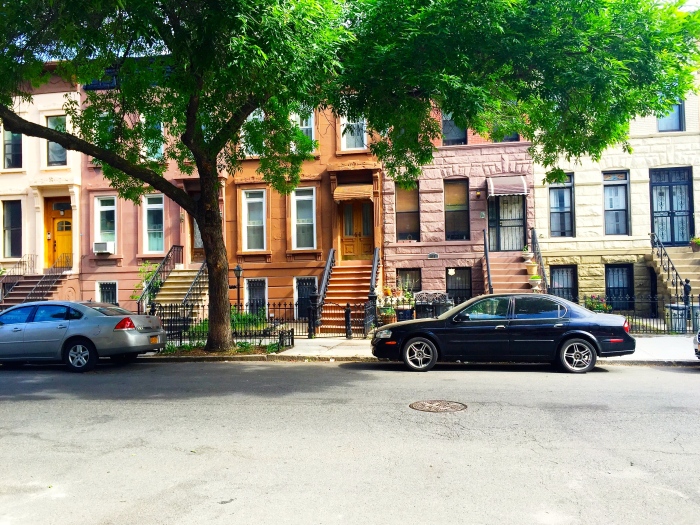 Sidenote: I ran into the lovely sisters of Nkem Life blog (Angel and Chi-chi) at the festival. They have a recap of the festival on their blog. Click here to read it.

Thanks for reading and have a blessed day!

I was just sent this picture taken by a photographer named Naima Atti, Owner of Inspirational Photography.

This here is her website. I thought I’d share below the picture she took of me at the festival 🙂

Click here to see some more pictures she took of people at the festival.

She also took these cute photos of Ebone and Anika ❤ 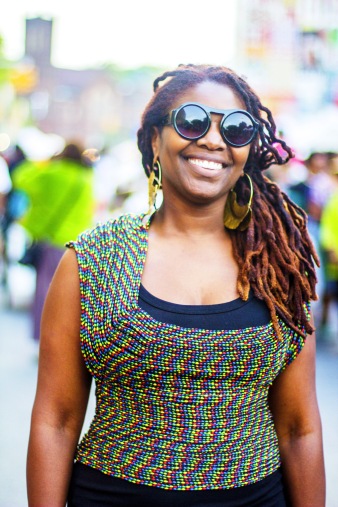