It’s that time of the week again! It’s Web Series Wednesday!!!  I am thoroughly aware that A Different World is not a web series..lol It’s an AMAZING show that first aired the year that I was born, in 1987! When I was  about 3 or4 years old, I faintly remember watching it with my dad and brothers. I believe it was the episode that Whitley and Dwayne married but my memory is fuzzy.  However, as I grew up in the 90s I remember really falling in love with the reruns that aired. And then in the summer of 2005 right before I entered college at an HBCU {a Historically Black College University just like the fictitious one on the show “Hillman College”}, I became obsessed with the show and even recorded it on VHS..lol ANYWHO, I am soo happy that all six seasons of A Dfifferent World are on Netflix! God is good! I used to watch my favorite episodes on YouTube and TVOne but now I can watch them in clarity & minus commercials on Netflix!!! Won’t he do it!? I am so excited. I am such a big fan of the show I am a proud Hillman alum. I even have the alumni shirt to prove it..lol 🙂

P.S. My shirt is from The Hillman College Bookstore. 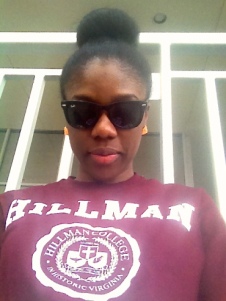 One thing I just ADORED about this show is the love they showed for black history and African culture. Especially through their fashion. In one of my favorite episodes featuring the late great and FIONE rapper Tupac , Charmaine can be seen rocking a Kente cloth outfit from head to toe. She had on a Kente crop top and wide leg Kente pants. She also wore an unnecessary matching hat {but hey it was the 90s and a lot of ish was unnecessary in regards to fashion i.e. big shoulder pads}. I can so see someone rocking her outfit in 2015!!! Everything she has on is coming back. I love the outfit {minus that silly hat}, see below. I wish I got a better shot but it was late and I was watching it on my laptop.

This Kente outfit  was so cute and it’s just a peek into the African and African inspired fashion that the cast rocked. But that was the early 90s with that whole back to Africa, black power/fight the power, 90s hip hop movement ish going on. The good ole days!!! Her outfit reminded me of my one Kente outfit as a child {see above on the right}. I wore this outfit a lot. I looked at one picture in which the pants looked like capris because I had outgrown them so much..lol But that’s besides the point! If you have Netflix, check out A Different World. All six seasons are FREE to watch if you already have a Netflix account . So many of the issues the show tackled are still relevant issues today. A lot of the fashion styles are coming back as well. I love that show and I feel so nostalgic watching it. There are many guest appearances by musical and acting greats. Some who are no longer with us today and some living legends. Plus it’s a funny show. Whitley, Freddy {and her fine boo Shazza Zulu} as well as Ron CRACK me up. My good friend Bebe sent me this text below yesterday.

I actually wrote this post last Wednesday but I didn’t post it until today but I thought I’d add her text to show you that I ain’t the only one reminiscing!!

What is you favorite episode of a A Different World? Who is your favorite character?