He has a straight-A average. He scored in the 99th percentile on his SAT. And he’s a shot putter, viola player and a cappella singer.

Meet Kwasi Enin, the boy genius from Long Island who’s been accepted into all eight Ivy League schools. His extraordinary achievement was the talk of the education world Tuesday, but the 17-year-old aspiring doctor took all the attention in stride.

“It has been a little crazy, but I never really feel overwhelmed because I love what I do and I have great support,” Enin told the Daily News.

The senior at William Floyd High School in Mastic turned instant celebrity after it was revealed he hit the Ivy League jackpot. He was profiled on ABC’s “Good Morning America” and his name was trending on Twitter.

But all the adulation isn’t going to Enin’s head.

A first-generation American whose parents are from Ghana, Enin figured applying to all eight elite schools would improve his chances of getting into one of them.

His first acceptance letter came from Princeton in December, the last from Harvard at 5:30 p.m. Thursday.

“I thought Harvard would be the one to reject me,” he said .

Collectively, the Ivy League schools accepted fewer than 9% of all applicants for the class of 2018, ranging from 5.9% at Harvard to 14% at Cornell.

Enin ranks in the top 2% of his class and aced 11 advanced placement classes. The son of two nurses, he also volunteers in Stony Brook University Hospital’s radiology department. But he said he believes what truly sets him apart is his passion — for everything.

“Every admissions counselor I spoke to at the Ivy League schools brought that up,” he said. “It’s a big part of who I am.”

Enin hasn’t yet made up his mind about where to take his prodigious talents. But with its strong reputation in medicine and music, he’s leaning toward Yale. He’s particularly drawn to its biomedical engineering program.

“I want the passion of music and medicine to be part of my life wherever I go,” added Enin, who lives in Shirley.

Some Enin admirers joked on Twitter that he should follow the example of exceptional high school athletes and reveal his choice on TV.

“Kwasi Enin should do a hat reveal live on ESPN like hs athletes do,” wrote a poster with the handle @bradleySFR. “It should also be live on CNN, Fox, Weather Channel & TruTV.”

“I heard other kids remarking about him — ‘I want to do that,’” she said. “It couldn’t have happened to a better kid. He’s such a well-rounded, humble and modest young man.” 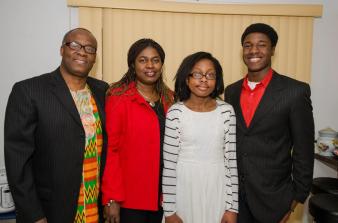 Kwasi Enin (r.) poses for a photo with his dad Ebenezer (l.), his mom Doreen (2nd from l.), and his sister Adwoa (2nd from r.). Photo Credit: David Wexler